Brent Lavoie was born in Riverside, CA. He relocated to the Midwest and was a 1999 Glendale High School Grad in Springfield, Missouri. He held down the Hot Corner at 3B and helped lead his Falcons to the State Championship Game in ’98 finishing as Runner-Ups. The Falcons set a school record for wins during the Summer Legion season with an overall record of 52-9. His senior year Glendale won another District Championship and made a run to the State Quarterfinals. Lavoie earned All-Conference & All-District honors his Senior Year. He was also the team’s Golden Glove Recipient.

Lavoie was recruited to play collegiately at Missouri Valley College in Marshal, Missouri. He was the starting SS on their JV squad and was able to use it as a redshirt year. He then headed to North Arkansas Junior College in Harrison, Arkansas. There he was a Team Captain, earned 1st Team All-Conference honors & won Golden Glove Awards as a Freshman & Sophomore playing 2B for the Pioneers. Lavoie returned back to Southern California at thee Biola University. He earned a B.A. degree in Communications. He was a 2 year starter at 2B and helped lead his team to the 2003 NAIA College World Series in Lewiston, Idaho. He crushed a bomb his 1st World Series at bat! In 2004 he was a Team Captain. Lavoie committed only 5 errors in 2 seasons with the highest fielding % on the team. The sure handed Second Baseman loved to flash the leather & was notorious for laying down the surprise push bunt to find his way on base.

Lavoie is entering his 16th Season as a high school head coach and 5TH at Long Beach Poly. Valley Christian, Whittier, La Mirada, and Whittier Christian were previous schools he coached at. He also coached 6 seasons with Summer Collegiate Teams. He served as Head Coach of the Gold Coast Miners (’08), East LA Dodgers (’09-’12), assistant with the So Cal Catch (’14), and the So Cal Shepherds in ’20. He also served as an asst Chaplain.

In 2006 Lavoie led Valley Christian to an Olympic League Championship his first year as a Varsity Head Coach. He then took the reins at Whittier High School & doubled their win total his first year in ’07 and fell 1 game short of a playoff spot in ’08. He was named a Whittier Rotary All Star Head Coach in 2008. Lavoie then teamed up with La Mirada High School as the Head JV coach. His JV Matador’s claimed Back to Back Suburban League Championships in ’09 &’10 posting an overall record of 40-14 & 23-1 in league play. In 2011 he took over as Whittier Christian’s Head Coach. He coached 6 seasons at Whittier Christian with a 100-78 overall record, claimed an Olympic League Championship, had 3 league runner-ups & 5 CIF Playoff Berths including the last 4 in a row. The 2011 Heralds went 23-6 overall & 11-1 in league play capturing the Olympic League Title. A special year it was where he was named the 2011 Whittier Daily News Coach of the Year and again was the Whittier Rotary All Star Game Head Coach. The 2014 squad had a memorable run advancing all the wat to the CIF Quarterfinals. The ’15 &’16 squads each won their Playoff Wildcard game before bowing out in the next round.

Lavoie was hired in the summer of 2016 at thee nationally recognized Long Beach Poly High School. The ’17 squad reached the CIF Playoff’s in Lavoie’s 1st season. In just his 2nd season the program did something quite remarkable. Poly won their 1st CIF Playoff game since 2006! Just 2 days later they won their 2nd Playoff game! This accomplishment hadn’t been done during any of the current player’s lifetime. History was made and the ’18 Legacy is firmly cemented. The 2019 Squad then followed that up with an OUTRIGHT MOORE LEAGUE CHAMPIONSHIP!! Their 1st since 2012 and only the 2nd in the last 34 years! Lavoie was named the Long Beach Press Telegram Coach of the Year. The team also had the MVP & CY Young of the league. The 2020 squad was poised to make history again and claim the 1st ever Back to Back Moore League Titles. This thing they call Covid-19 had other plans only 10 games into the season. Poly was in 1st place in the league and looking real strong.

Lavoie currently teaches at Long Beach Poly as a Resource Specialist Teacher, Co-Teaching in the English Language Arts Department. He is currently in his 15th year as a high school teacher. He also assists with the Fellowship of Christian Athletes (FCA) Huddle on campus for the athletes.

He married his best friend Kristen-Wesley Lavoie (former USA Junior Olympic Softball player & Biola University Pitcher ’06 Grad) on July 21st 2013 & lives in Newport Beach with their Australian Kelpie doggy named Cali A.K.A “The Coo”. Cali Coo is known for her great anticipation, fast twitch explosiveness, incredible agility, and raw speed that has defined her a species like no other. She loves the baseball field where she can demonstrate her skill-sets. She’s extremely pumped up for the new season at Long Beach Poly & the Jackrabbit family. She also claims to be faster than any Jackrabbit that takes the field and never has been shy in backing it up. 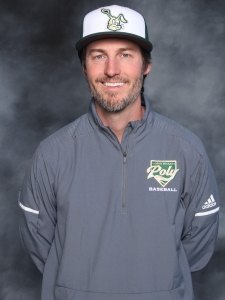 Greg Suzuki will assist at the varsity level once again in his 5th Year at Poly. He was a star prep baseball player who was coached by the legendary Art Mazmanian at Powerhouse Dorsey High School in Los Angeles. Coach Mazmanian went on to successfully lead Junior College Mt San Antonio and the field is currently named after him. Coach Suzuki hit for average and was a speedster on the bases in his playing days always creating havoc and applying pressure on opposing defenses. Coach Suzuki has been coaching youth sports for many years and currently coaches his nieces 6th grade “Cherry Bombs” Basketball Squad. Hustle, tenacity, and all-out effort are the programs foundations. Somewhere in the bloodline we have a strong consensus that future Hall of Famer Ichiro Suzuki received his speed and baseball instinct from Coach Greg Suzuki….Report’s haven’t been fully confirmed but there’s really no other logical explanation.

Suzuki attended Long Beach St where was a Recreation Major before pursuing an education in Computer Programming. After receiving certifications he spent the next 35 plus years successfully working in multiple Computer Information Technology jobs. A passion turned into a career and the years flew by. Coach Suzuki is a committed, determined, hard-working man who will be in charge of managing the dugout this season.

He will focus on the in game details of charting the base running game and the opposition tendencies. He will also record data on the teams overall Team Performance Index Charts to help break down the game within the game. He has been married to his lovely wife Carol for over 40 years!! He has 3 children who are all avid baseball fans. His boys are Gregor & Jordan and his daughter is Kellyn. The entire family is sold out to Dodger Blue! 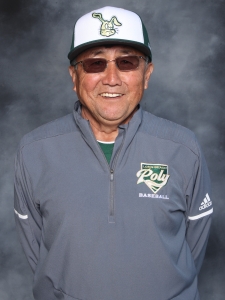 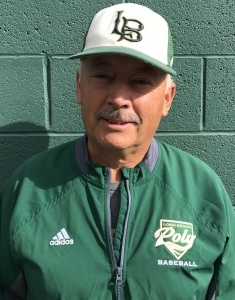 Johnny Alvarez was born and raised in the City of Angels. As a graduate of Franklin High School he starred in both Baseball & Football in his playing days. Coach Alvarez is excited to be a part of the Poly Baseball program as the Head Coach of the FROSH/SOPH team for the 3rd consecutive year and continue to lay and build the foundation of Poly baseball.  His passion for the game runs deep as he began his coaching career during a time when he was still playing travel ball in Highland Park, CA. Coach Alvarez is a big believer in fundamentals, conditioning, and attention to detail.

Coach Alvarez has more than 20 years of experience instructing students on the fundamentals of baseball. Over the years he has coached different levels from T-ball, Little League, Pony, Connie Mac and now High School.

He is no stranger to the Moore League, having spent 4 years as the Varsity Head coach at Cabrillo High School in Long Beach. He gained experience in all facets of high school baseball that included organization, direction, and administration. He is a hands-on leader with diversified talents in coaching, compliance, and program management. He also spent the 2017 season as the Head JV Coach at Valley Christian High School in Cerritos, CA.

As a resident of Long Beach for over 14 years he opened and operated a successful nightclub in the heart of Downtown Long Beach. His last three years he has managed the Federal Bar restaurant operations. Currently, you can find him managing SIP Restaurant and Lounge located inside the Renaissance Hotel. In his spare time he works for Engel & Volker’s as a Real Estate Advisor.

Coach Alvarez is looking forward to his tenure at Long Beach Poly and continuing the Jackrabbit baseball winning tradition. He is available for private consultations and can be reached at johnnyhustlelbpoly@yahoo.com